Capitalism is such a complex thing- in America it's over run our streets with red-headed clowns screaming out for you to buy sugar laden food.  In America it's raided our radio stations with the same music.. because it's owned and bought by a huge investor of Universal Music and Timer Warner (which are actually owned by the same.)  In America, capitalism has flooded our television with images of a glorified Tea Party candidate who would actually end up destroying our freedoms and taking away our choices in a pseudo fascist regime.

Captalism is something I am really bothered by but yet feed into.  France has started to open her arms to allow it to roam in the streets... unfortunately.  What are the signs?

Super Markets:  From Carrefour to Marché U, this way of food shopping has only existed for the last 40 years.  In the 1950's when American housewives had fake plastered smiles and perfect hair, shopping in the frozen food aisles and kissing her husband good night with a brandy in the hand... France was still heading to their marchés, buying their daily bread and vegetables.  Making extravagent home-made meals from the things they bought from the marché.. that's why their food is so diverse; they didn't destroy gastronomy with frozen replacements.  If you ever want to learn about why our food in America is 50% on average.. look into these key words:  slotting fee, distributor handling.  They pretty much mark up a cheaper produce.. if there were marchés in America (not the Farmer's Market, which is just glorified and overpriced) then the produce would be cheaper. 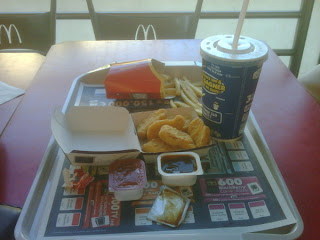 Fast Food:  McDonalds, or 'MacDo' as we lovingly call it here.  They are really making a profit of the people of France, with the same sickeningly quality and ingredients as we all remember in 'Supersize Me',  but packaged much smaller so it's more 'European'... and worse, marked up about 50%.  In France, you can buy a tomato for .10, but a medium sized chicken nugget meal costs €6; or $8.20 for those who are counting.  To put it in perspective, this meal costs the same price as 3 crêpes in the street... or in America as an entree at a restaurant.

Clothes:  Abercrombie & Fitch recently made their move into France, July 2010.  Not sure how their controversial employment practices are fitting into the highly protected French employee... needless to say, a great market to 'mark up' the clothes and turn a profit... because in France, anything American is 'fancy'.

American Way:  Big cars, American music, MTV.. television shows.  This is such a big industry here, the voice-over actors for movies and television shows are popular and well known. It was strange to me when I was watching 'Le Grand Journal' and a voice actor was the guest.. I was confused and thought he was the actor- until I saw a familiar American actor and I realized... French voice over.

English:  Now it is becoming a universal language.  Everyone needs to speak it, and most everyone does.  Lucky for me, the French often have notorious accents- so I don't feel so 'American caught in public' when speaking.  It's still strange to speak a language EVERYONE speaks, but to be learning a language only a few speak... of course Italian would be more unique.


It's sad, much like how Julia Child described in her memoirs, to see a culture becoming uniformed and losing her beautiful identity.  The France we see in the films is the France from 1950's and 1960's.  Now it's slowly decaying into the culture we so often embrace in America.

I think I'll be the last generation to see France as a unique culture... which is why I write to remember.