My Night in China

I can count the days on my fingers before I train it to Paris, and it is passing by quickly.  As Bri isn't here, I'm been busying myself with packing suitcases for Paris (we're doing a move via TGV, more to come later), eating with girlfriends and partying.

Let me rephrase that, utterly destroying my French Master's friends with bottles upon bottles of alcohol. 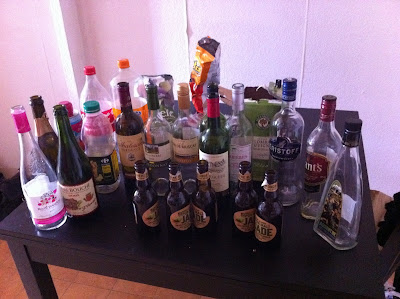 About this much.. for those who need a count, that's about 8 bottles of wine, plus a boxed wine (3 bottles), two full bottles of liquer, an 1/8 of a bottle of Absinthe... plus later into cleaning I uncovered 4 more bottles of wine.
Roughly, 11,25 liters of 12% alcohol, and about 2 liters of hard alcohol.  For about 16 people... so.. a lot.
This was the end to a very long week, one event at the Chamber of Commerce in Paris, one morning of terrible illness and then a train at 6am the next day.
All in all I was thrilled when my good Chinese friend, Qingyun, invited me for a free Chinese dinner at some of her close friends. 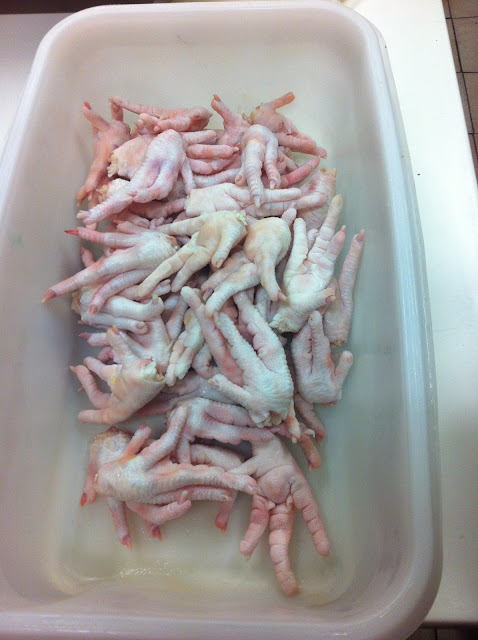 The minute we walked into the restaurant, I could see it was clean and family oriented.  Bisous passed around, Qingyun began rapid fire Mandarin with the chef and then her herself pointed to a giant bucket of dinosaur-looking body parts.
"We are going to eat chicken feet tonight!" I smiled, I wasn't shocked, this is exactly what I wanted to eat. I had heard about for years from my Sister, and I was thrilled to eat with the family and be a part of the experience.
The kitchen was covered with the dense smells of spices, I noted around me, ginger, garlic, star anise, cinnamon, salt, pepper, oyster sauce, hoisin sauce, soy sauce...  The chef expertly used his giant spoon to eyeball out the quantities and toss into his wok that he tossed around as though it weighed nothing.  A giant chef's knife laid on the chopping board, which he's used to chop the toes off the chicken feet, mince up the vegetables.
I watched with intrigue as I realized this dinner wasn't a little dinner, they had made about 5 different dishes.  2 dishes were crab based, one short ribs, one chicken feet, another with mussels, fresh baby peas.  Qingyun jumped on the wok and began doing the same, I sat back afraid to touch anything, but observing nonetheless. 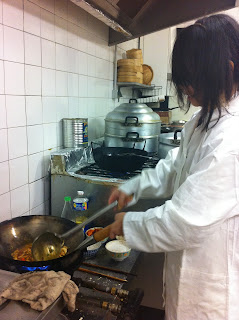 "You like spicy?" She smiled at me, "Most white people don't like too spicy, the French like sweet or bland..." I nodded, of course I loved spicy.  I used to eat jalapenos on my eggs for breakfast!
Finally the meal was coming together, the chef adding the finishing touches, a dash of salt, a ladle full of sauce:
I sat at the table, set before me a completely luxurous meal...
So.
Story is, if you wanna have some good Chinese, for not too expensive either A. Find a Chinese friend, or B. Go to Seng Heng in Lyon 3ème: http://www.webcity.fr/seng-heng-lyon/lieu
The owners are incredibly nice, patient and even though they've tried to branch out to Japanese specialities, try to ask for the typical Chinese dishes; dumplings.. Very high quality, clean kitchen and gentille staff.
a+
Written by Sasha S. around 7:50 PM