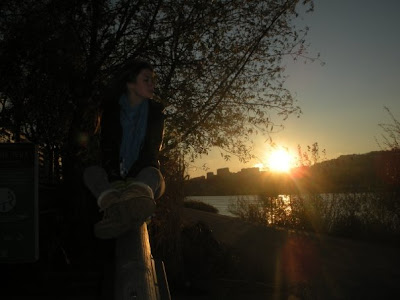 My name is Sasha, 26 years old with a truck-load of experiences being hauled around.  In July of 2010 I boarded a flight that took me 12 hours and 3,360 miles away from home in order to start a new life in Lyon, France.

Most Americans pack the caravan to Paris, but taking a risk I headed south.

Somehow from lucky twists and turns I ended up finishing my undergraduate degree in Portland where I met a French guy with a not-so-French name.  By chance I already had about 6 years of French under my belt and my plans were to do international Management specialized in French speaking countries.

Zoom to July, 2010, my whole 4 years of Undergrad were shoved into two suitcases and I tearfully kissed my American life behind.  No more Taco Bell.  No more drunken nights with my girlfriends.  No more flip flops.  I boarded a plane to London, hopped a train to Lyon.  16 hours later I found myself in my only French friend's apartment.. Brian.  Strangely the 320 sq ft apartment didn't phase me, but the fact that the toilet was separated from the sink? Insane.  My first apartment had a kitchen/living room combo, the fridge went to my knee and I cooked on a hot plate.  Even in my University years I had a stove.

Over a process of 2 years we were able to expand our living quarters, and thus I wrote about the mishaps, the mistranslations, misadventures, bref, lots of misses. In December 2012, an opportunity arose and we packed ship to Paris. For a period of a year and a half I lived in a small studio, worked in a high-powered firm with only French co-workers and enveloped myself into a different French culture.

Finally, October 2013, I touched down permanently back into Portland, Oregon, my hometown. Even as I reminisce about the 3+ years I spent overseas, I realize there has been a total change in Portland, creating a nice eclectic piece to turn into backwards culture shock, which people don't often describe... but it sure does exist. Even though I got my flipflops back, the 3 years changed my personality and here we go on the next adventure...