One of the biggest things that I miss about Portland and the United States is smiling waiters and happy customer service representatives.

In France it feels that everyone is scowling, angry or wanting to be somewhere else.  I find it ironic that in a country where healthcare is free, education is cheap and the government offers public aid as needed anyone could be unhappy.

Maybe it's the high heels that cause the scowl?  Even little old wrinkled ladies in France strap on their skin-colored high heels to trek through the park.

Servers in France are among the angriest people I've come across.  Every restaurant or grocery store I go to I receive a scowl, a simple and brief statement of the cost and a "bonne soirée".  Bri and I even got crap from a sushi restaurant just yesterday for wanting to split a menu together- because as the server said, "it's abnormal" and "he's never heard that" and the best, "next time come in and eat normal,"

My goodness, I mean, we go to your restaurant to eat and we should have the freedom to eat as we wish!

I only found one restaurant called, "Le Caveau" that has a smiling server.  It's almost worth it to pay 13 € to sit and enjoy the smiles and jokes of a server for once.  I wonder when France became a place of sadness or anger instead of an idealized place of beauty?

I notice also the fact that the 1950's France that everyone idealizes and paints in books is disappearing at a rapid rate.  The streets are losing the typical boulangeries and fromageries and are being replaced with "American Fast Food", Starbucks, Halal butcheries and lots of Kebab shops.  The sides of buildings built in the late 18th century are marked with french graffiti like:  "fuck the police", or, "fuck your mother".

Hostility in France in growing at an alarming rate and sometimes I turn down a road and am led to ask myself, Am I Still In France?

I was shocked to see the following events during the last few weeks:

July 17th:  Riot in a small French town near Grenoble after an armed robber shoots at Police.  In the end the police had to shoot the suspect because he would not cease firing at the police (it's rare Police are violent in France).  Link to Article Here  After the suspect was shot entire groups of people rose up and began a series of destruction.  60 cars were burned, innocent people on tramways were terrorized... it's hard not to hold a grudge against people that act like that.  I mean, look at the video, it doesn't even LOOK like France.

Just outside of my own home a car was burnt following July 14th... and it was shocking.  Video of Car Burning outside our Apartment

Romanticized France is slowly disappearing.  The only place I could find that made me feel like I was in a beautiful countryside was near Bri's parents in Genas.  We hiked up about 20 minutes into the local woods and found ruins that were left from 700 years ago... 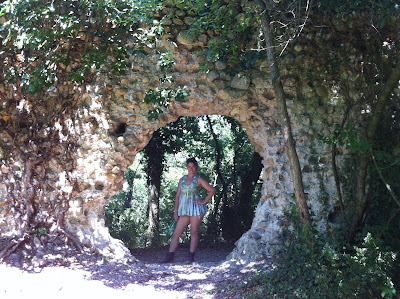 I'm in the center of the ruins in supposedly what is the entrance.

I am still waiting for the France I grew up learning about.
Written by Sasha S. around 12:55 PM