Cooking in France: Peaches from the Market..

Yesterday Bri and I were invited by some close friends to enjoy what they call, "apero-manger" where everyone brings either two dishes or a dish and a drinkable thing.

I made an effort to go to the market and bring some of the freshest veggies I could buy- meaning a 'crudité' platter which is simple sliced veggies and a sauce..

Just mix all of the above ingredients to make a nice dip for crudités, if using sour cream omit the lemon juice.  Set in fridge or let mingle the flavors for about an hour.

We also noticed some super ripe peaches, so I couldn't help myself and decided to make some little dessert 'bouches' or bites.

Well in the end we bought way too many veggies (only 16€ though, which in comparison to the U.S. for the number of veggies we got, is cheap).

The veggies in france taste WAY better than the U.S.  Peppers are oddly shaped and dirty when bought, but then washed, trimmed and sliced.. holy moly.  It's a burst of intense flavor that I never got to enjoy back home.

The peaches are to die for, and thus, I created a recipe off the top of my head to use up some leftover pie dough and the peaches that were extra from yesterday:

Drunk Peach Pie
Ingredients:
4-5 nice big ripe peaches (if using frozen, make sure to remember there's more water in frozen)
1/2 cup dark rum
1 cup sugar
2 tablespoons butter
2 tablespoons flour
2 cinnamon sticks
pinch of nutmeg
1 rolled out pie crust in pie dish for one 9" pie, (poke holes in bottom)
Preheat oven to 400° F
Instructions:
1.  Wash peaches and cut off as much flesh from the core as possible, chop this into 1/2" cubes and set in pan, continue until all peaches are cut up and in the pan.
2.  Toss in 1/2 cup of the sugar, the butter and the nutmeg and cinnamon sticks
3.  Put temp on med-high and stir frequently, when it looks like the peaches are releasing some liquid, toss in the dark rum and rest of sugar.
4.  Continue to stir around and then add the flour, removing off the heat to stir it equally, place back on heat and notice it becomes very thick and "rouxish"
5.  Pour mixture (take out the cinnamon sticks) into pie crust/dish and brush crust with some butter and set in the oven.  Bake at 400°F for 8 minutes, then lower the heat to 365°F for another 20 minutes, until the crust is browned and the mixture is a darker color and bubbly.
Check out the photo of my invention! 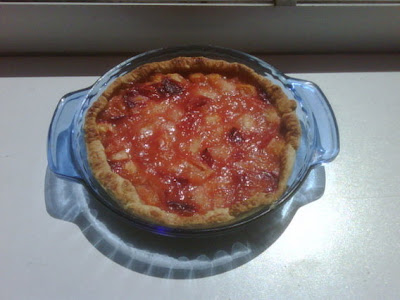 Super delicious, and great for the summertime.  Notice it's a 'drunk peach pie' due to the rum.  Serve warm OR chilled with some vanilla ice cream... mmmm!!

As for the rest of the veggies, I cleaned them, sliced them and put them in nice ziploc bags so whenever I get the munchies I go for celery before I go for chips.  good idea- eh?
Written by Sasha S. around 4:05 PM