After dinner with my French family last night we watched a documentary on the life and current state of Paul Bocuse.  I recall that the moment I arrived in France I had no idea who Paul Bocuse was and why he was so important.  Interestingly enough he's definitely a famous personality in our little region and our city of Lyon- but he's also got a bit of a juicy history!

Paul Bocuse was born in the 1920's in the mountainous area of Collonges-au-Mont-d'Or near Lyon.  Born into a family of chefs, he began cooking quite young and helped to run his family restaurant "l'Auberge de Collonges".  Bocuse was involved in WWII, and following this went on to achieve a series of Michelin stars in his restaurant before beginning his last 30 years of marketing and branding. 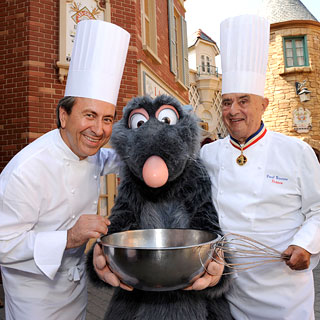 Now, an old man at 85 years old, Bocuse sort of just panders around for money... I say this with a sort of 'gentillesse' but, in reality, the guy knows how to get money.  Once one of the most innovative chefs, now a man who utilizes his name to make as much as a profit as he can.  I'd like to highlight two of his most famous creations:

Soupe aux Truffes:  A simply delightfully rich soup that is composed of those oh-so-expensive truffles.  I probably will never make this at home, but I would love to try it when I have enough cash to eat at his establishments.  RECIPE: http://www.bocuse.fr/recettes/ficherecette.asp?id=199

Loupe de Méditeranée en Croute:  How can anyone go wrong with a sea bass bundled into a feuillité and served with a decadent sauce?  Always the one to push from 'fatty' to 'cardiovascular destruction' this takes a healthy dish and twists it into a buttery delight.  RECIPE: http://www.bocuse.fr/recettes/ficherecette.asp?id=194

However... there is more to this 85 year old dude, not only is he a keen marketer, a top chef and a legend to Lyon.. the guy is a virile as we say in French, or basically a love monkey.  Bocuse has three women that he has been seeing similtaneously for the last 30 or so years, officially married to one, he keeps three houses in order to satisfy his craving for different personalities... way to balance the love boat.

Raymone, Raymonde and Patricia.  Somehow we never truly hear about the fact Bocuse is a polygamist, most likely because his amazingly talent in the kitchen leads us to sort of forget the three-women syndrome.  Why 3?

One of them is his hunting/outdoors partner.  Every day, after waking up next to his wife (Raymonde) he wanders out to his forest home to see his lover (Patricia).  Together they walk around the lake, slowly taking in the scenery.  He makes open-fire meals from the animals they fish or hunt together... a parade of hunting dogs following behind.

Once this gets boring, he heads out with the other one for his foreign affairs, her with her coiffed up hair and pristine young look, perfect for photos and the superficiality.  She loves to travel, so she comes with him oftern around the world.

What about his actual wife?  Well she's there for any official 'local' publicity.  Taking photos with the chef dressed in his toke, smiling and still looking as though none of this is abnormal.

It's strange.. but yet so French?  It seems more of a parisian attitude to have mistresses and lovers, and the Lyonnais tend to be more on the 'stick to one' type of relationship.. but Bocuse opens that for discussion.

Outside of Bocuse's private life he runs a few restaurants in Lyon.  Le Sud, Le Nord, L'Est, L'Ouest.  He also has the original restaurant located on the collonges-au-mont-d'or... for a price.  By far, L'Est is the best restaurant out of his collection.

Want to catch a glimpse of the master?  Try mornings at Les Halles next to La Mère Richard.. that's an old French and cheesemaker so he oftens makes visits to share a coffee and a laugh.

Now I wonder if anyone ever noticed this...